A different kind of CV
From 1967: professional activities

»From that time on, for the next 40 years, I lived simultaneously in two worlds«

When my parents found out that I wanted to continue studying music after my military service, they tried to make me understand that in their opinion a “musician” could not build a reasonable life and that I should study something “proper”. I did not see this problem – and rightly so, as it turned out later. After a short consideration, however, it was easy for me to comply with her wish and enrolled in the subject “Electrical Engineering” at the Vienna University of Technology – as a kind of reinsurance. This course of study covered practically the entire field of electronics including acoustics and mathematics and, in addition to music, was entirely in line with my interests.

From then on, for the next 40 years, I lived simultaneously in two worlds: that of music and the “fine arts”, which had seemed so desirable to me since my high school days, and the rational, logic-dominated world of science and technology. As it later turned out, this combination had the potential for fruitful synergy effects.

Since a curriculum vitae structured by year would be too confusing due to the simultaneity of the different fields of my activites, the curriculum vitae is divided into artistic, pedagogical, scientific and organizational activities according to the following overview.

Studies “Horn” at the University of Music and Performing Arts Vienna (at that time: Academy of Music in Vienna).

Studies “Electrical Engineering” at the Vienna University of Technology (at that time: Technische Hochschule).

Enrolment and completion of a special course in “Sound Engineering”

Member of the Orchestra of the Vienna Volksopera

University assistant at the Department of Music Acoustics (Wiener Klangstil)

Senior assistant at the Department of Music Acoustics (Wiener Klangstil)

Authorization to teach as senior lecturer

Assistant Professor at the Department of Music Acoustics (Wiener Klangstil)

Deputy Chairman of the Senate

President of the Austrian Acoustics Association

Member of the Austrian Standards, Committee “Acoustics”, the EN and ISO Committees

Honorary member of the Department of Music Acoustics (Wiener Klangstil)

Member of the Orchestra of the Vienna Volksoper

Numerous recordings, some of them solistic for Deutsche Grammophon, Amadeo, Nippon Columbia, etc. 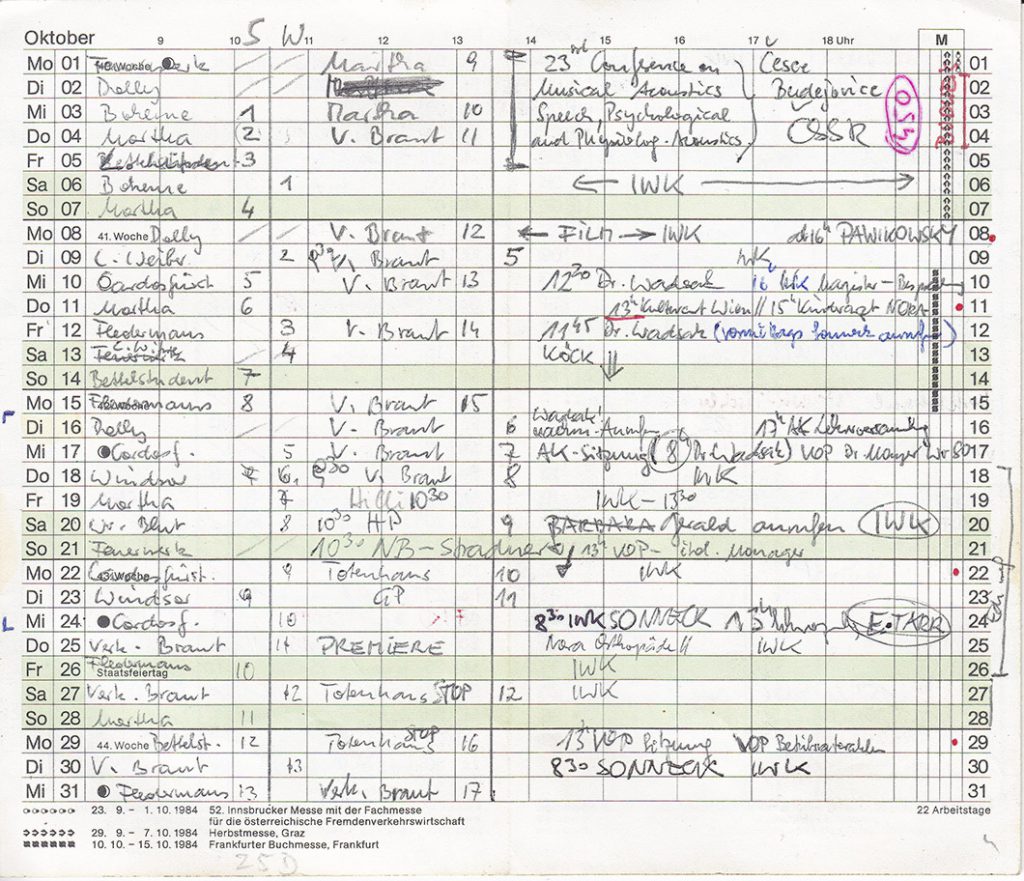 This diary page and the further ones give insights, how such a job-related double life can look like. In large orchestras the wind players are always doubled. This means: 2 persons share the daily orchestra services.

From left to right: 1st column: Short name of the evening performance, 2nd and 3rd column: who plays the corresponding performance (S=my colleague, W is me). The next columns apply to the morning rehearsals. The remaining part contains mainly appointments at the music university or with ministries, management appointments (VOP) and general matters.

The MDW played a pioneering role in this field worldwide, as such lectures now exist at most music universities and conservatories. The reason for this is the fact that the player and the instrument form a control loop within which they influence each other and the fact that almost all professional musicians slide into a crisis at some point in their career and do not know whether it is due to themselves or to the instrument. In such cases, the only way out of the crisis and to draw the right conclusions is to have a detailed knowledge of how your own instrument works and its inherent peculiarities.

In total, more than 3,000 students from around 20 countries attended my lectures and seminars. Many of them are now university professors themselves in Europe, the USA, South America and Asia and some of them hold leading academic positions in their institutions.

1981 – 2020 over 90 lectures/keynotes at international congresses, many lectures and special courses at European universities and more than 100 publications in national and international journals, encyclopedias and books. Some publications have been translated into French, Spanish, Portuguese, Hungarian, Polish, Japanese and Chinese. 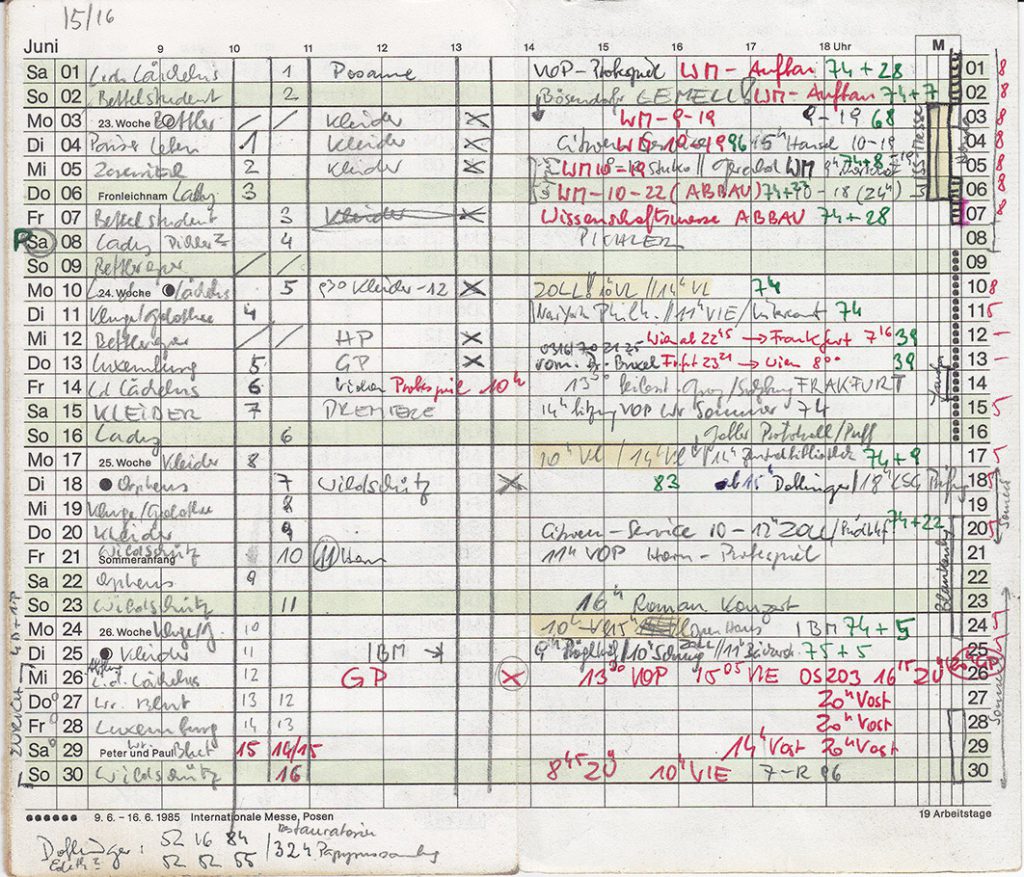 Foundation and general manager of the concert association “Wiener Volksopernorchester”. Within this framework took place among other things:

– the first appearance of an European orchestra in Singapore

– the first appearance of an Austrian orchestra in Thailand

– first concert tour of the Wr. Volksopernorchester to the Far East

– about 30 recording projects for the Vienna Volksopera Orchestra

– Organization of numerous concert tours in Europe and Asia

Organization of numerous international scientific conferences Symposia and congresses, among others the 92nd and 122nd AES Convention in Vienna with about 10.000 participants and 200 scientific papers/lectures

Conception and realization of “Technik Aktuell 3”, a presentation of research projects on behalf of the FWF

“Die Klangwelt Mozarts”, conception and organization of an interactive computer installation for the exhibition of the same name at the Kunsthistorisches Museum Vienna

Conception and organization of an interactive computer installation for the permanent exhibition of the Collection of Ancient Musical Instruments in the Vienna Hofburg.

Conception and organization of an interactive computer installation for the exhibition “Jakob Stainer” in Innsbruck.

Foundation of “Vienna Talk – Bridging the Gap” an international congress for musical acoustics, which is held in a 5-year cycle at the University of Music and Performing Arts Vienna and serves to improve communication between science, musicians and instrument makers.

Member of the worker’s council according to UG 02

Foundation and management of the “Head of Departments Conference” (ILK) 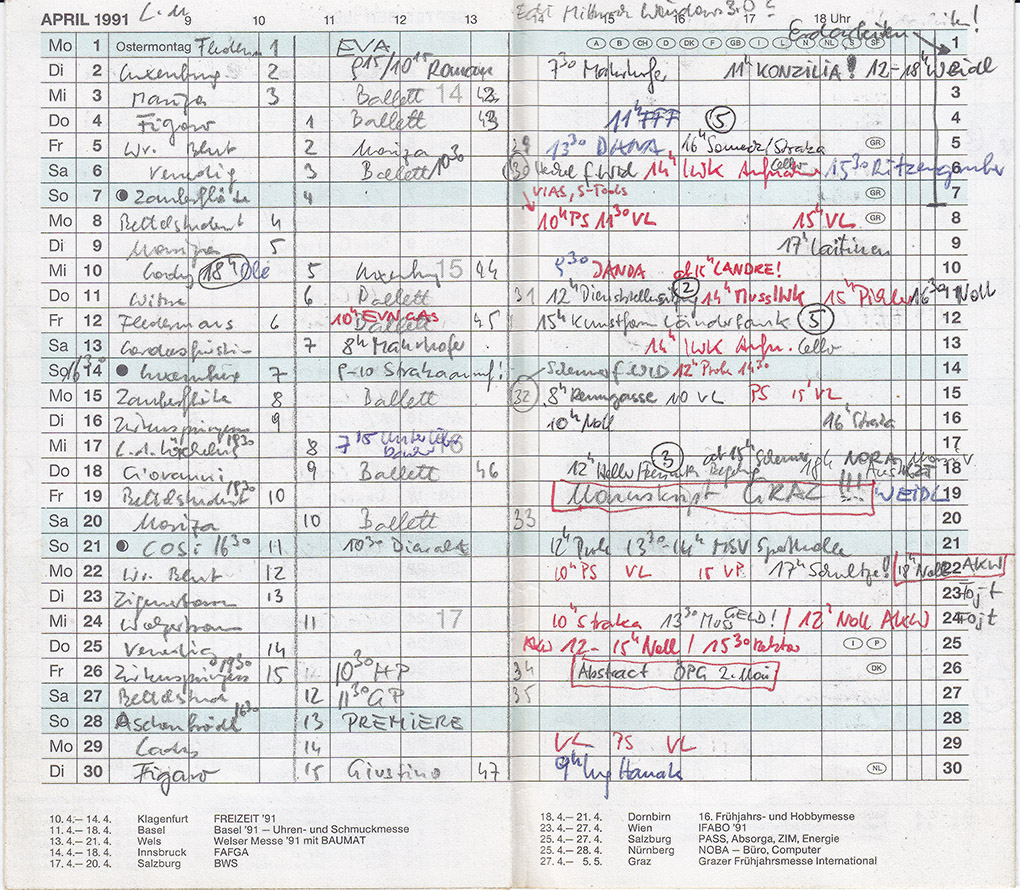 After “Musical Acoustics” was completely unknown in Austria, even in scientific circles, and musical instrument acoustics was not available at all, I started to go public as soon as I had something presentable. In 1981, just one day before the closing date for registration, I learned that the 2nd Austrian science fair “UNITECH” would be held in the Vienna Messepalast, registered immediately and managed to get a small stand. Since I had no experience with such fairs and did not have any financial funds for such an event, I stood in an empty booth one day before the opening.

From today’s point of view, these fairs were well-intentioned and really familiar – but unbelievably provincial and totally unprofessional. Because there was no booth management and certainly no real exhibition management, many of the scientists left alone like me did: In addition to the standard equipment of two 1×1 meter small tables, 2 wooden chairs and 2 shelves from the last century, they organized further chairs and tables. A few posters were stuck together and that was it (see picture). The only things that stood out from the poor standard mixture were a few professionally designed company stands, such as those of AKG, Siemens, Brüel&Kjaer and various scientific publishers

But there were also positive things: genuine interest from politicians! Hertha Firnberg, the at these times already legendary Minister of Science, did not, as is customary today, race through the halls for half an hour and then disappear without a trace, but spent half a day at the fair – alone and without a swarm of employees in tow. So she simply sat down with me and let me explain and show her what it was all about for a quarter of an hour. Her precise questions showed real interest and not just a pretended interest.

Until 1989 I participated in the following four UNITECH fairs and in 1991 in the “VIET”, the International Trade Fair for Electrical Engineering and Industrial Electronics in Vienna. However, the impact was small, because the really important target groups, the musical instrument industry, musicians and the general public could not be reached.

1992 – 2003: The International Music Fair Frankfurt, the world’s largest annual music fair, was already in a different league. In 1992, the IWK was already fairly well established and I already had several employees. So I made an appointment with the Ministry of Science to raise the necessary funds for booth rent and travel expenses as an exhibitor in Frankfurt. To my surprise, the responsible ministerial advisor immediately promised me a budget of 82,000 shillings! He was very pleased with my initiative and said that the Ministry had its own budget for participation in foreign trade fairs, but that no one had yet claimed these funds. Of course – nobody knew about this pot due to a lack of transparency!.

However, the logistics for participating in the Frankfurt Music Fair were quite complex at that time: With almost 2,000 exhibitors worldwide, hotel rooms were hard to find during the fair, but were prohibitively expensive. I had never stayed in such small hotel rooms at a price you normally pay in a 5-star hotel for a small suite. But in return, there was champagne as a standard with the rich buffet breakfast, a thing that, to my astonishment, the staff of the different companies already made use of in the early morning. The computers and equipment that were to be exhibited required an export and re-import permit to be issued by the Ministry of Commerce. The transport had to be carried out by transport companies who could ensure correct customs clearance, and had to be coordinated with the stand management in Frankfurt, etc.

Every year up to and including 2003, we participated 13 times in this event and were thus able to enormously increase our level of public awareness in the international musical instrument making community and among professional musicians.

2014: European Researcher’s Night in the Old University of Vienna. On this occasion the first EU-project of our institute “BATWOMAN” was presented among other projects. The project submitted by Wilfried Kausel was funded by the EU with 3.9 million Euros.

2018 “Der Klang von Wien” (The Sound of Vienna) A documentary film, 42 min., by Alexander Schukoff (director) & Nadeschda Schukoff (screenplay), produced for 3SAT, ORF II and ORF III, with the participation of Zubin Mehta, and partly designed by me.

1981 ORF TV ZIB 1, “Kunst und Wissenschaft” Report on the work of the Institute für Wiener Klangstil in the most important news program at prime time in Austria.